Nigeria Twitter Ban: The Ban That Didn’t Go As Planned

By now it is no longer news that the Nigerian government banned Twitter and has asked the microblogging site to register in Nigeria as an entity and removing the accounts of some citizens as conditions for reinstating the site in Nigeria. Human right activists and organisations that rely on the site for meeting some of their goals have since criticised the move by the Federal government.

It all began when the American social media giant deleted a tweet by the President of Nigeria Muhammadu Buhari that threatened to military force on the South Eastern part of Nigeria.

But since then, many Nigerian celebrities and public officials have resorted to to accessing the site using Virtual Private Network (VPN) services. In fact VPN services are so affordable these days that it has given virtually anyone who can afford as low as 1,500 Naira a week to access banned sites like Twitter.

For a country that says it has banned Twitter, the trend section which is a big part of the site is still very much alive to daily happenings in Nigeria. Take a look below at today’s own for example. 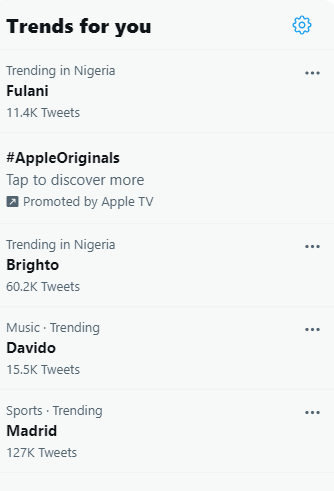 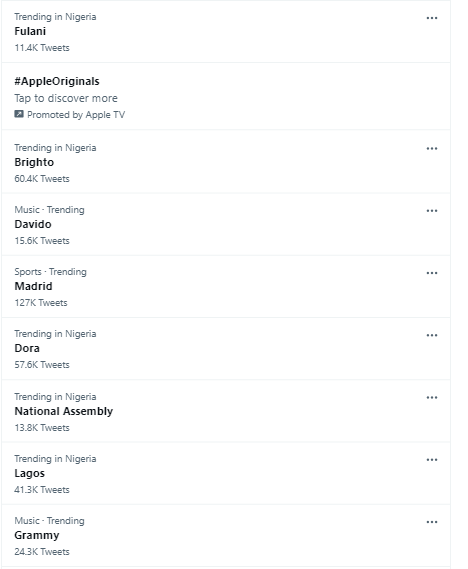 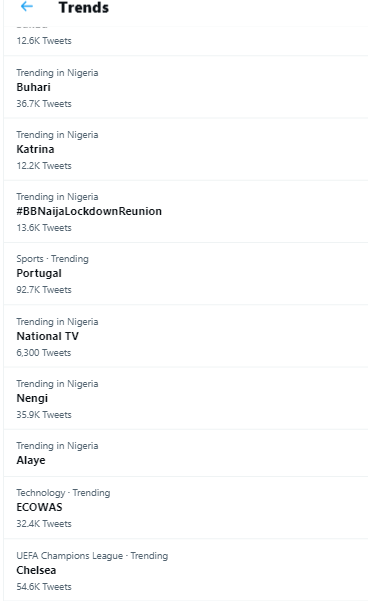 The issue for the government is that the government lacks the technological infrastructure to completely bypass VPN services and as long as the App Store and Play Store are there, VPN services will be available. No doubt some traffic has been lost to the microblogging site from Nigeria as many simply cannot be bothered to go through the whole VPN set up process.

The fact that what is making traditional media headlines is trending on Twitter means that millions of Nigerians are still tweeting to make those topics trend. The trend section on Twitter is Twitter’s killer feature. While Facebook changed the newsfeed, Twitter made “Trending” a big thing. For a topic to trend, thousands and if not millions of individuals and organisations have to keep tweeting on a topic or a hashtag. Twitter started showing top 20 trends but now for many, the number is now 30. The other beautiful thing about trends on Twitter is that you can change locations at any time to see what’s making the rounds in just about any location on earth.

Take the BBNaija Reunion, the Enugu shootings and the current Euro tournament for example, These are hot topics that have been trending and the government is not able to do anything about it. The ECOWAS court in a ruling yesterday said that the Nigerian government cannot prosecute those who have been accessing Twitter via VPN because it would make it illegal. The bigger sign that the government may thinking of reversing the ban is the appointment of Ministers led by Lai Mohammed to go and “negotiate” (whatever it means) with Twitter.

Countries and donor agencies have all condemned the government’s actions and called it a form of stifling free speech.

The big problem to see is not even today’s decision to ban but tomorrow’s scepticism by investors to look their Nigerian direction. Investors are wary of nations that have totalitarian leaders that can block or unblock services at anytime they wish. In fact, I heard a scary analysis from a friend recently where he said, the government of Nigeria could one day target the budding fintech sector. Look at what the Lagos State government did with Gokada and OPay bikes that were easing movement in the traffic plagued mega city. Those startups were asked to stop without any due recourse job losses and other attendant social problems.

While the startup environment is growing in Nigeria, it is not at the pace it should be considering the talents in the nation.

The Twitter ban was a show of government strength because you see, the tweet was made from President Buhari’s personal account and not the official “Presidency Nigeria” account. As a sitting United States President, Donald Trump’s personal account was blocked and as furious as he reportedly was, he didn’t order for a multibillion dollar institution with over 1,500 staff to be shut down.

This is the approach we should be taking, think economic implications before politics. It may be politically right but is it economically right to ban a service that millions of people in your nation rely on? Nigeria reportedly lost 24b Naira in the first 10 days of the ban. Twitter market value on the other hand is now $48b from about $45b some three months ago. Twitter is still one of the most visited sites in the world with over 3.2 billion visits per month with userbase of over 350 million registered users. Simply put, the ban has affected Nigeria and has done nothing to Twitter’s global standing.

Perhaps the troubling part is that the ban is working for a very small number of Nigerians while a large majority keep tweeting. The only “good” thing to have come out of this is that, the online bully and abuse rate on Nigerian Twitter has dropped a bit.