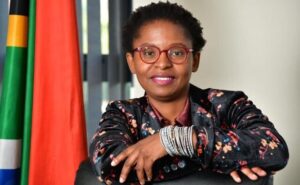 According to the new South African Minister of Communications — Khumbudzo Ntshavheni — the country needs a new platform like Mxit due to the recent happenings surrounding Facebook’s apps’ shutdown. The minister said the outage should be a wake-up call for the South African government to put more effort into supporting the creation of South African-owned social media platforms.

According to Mrs. Ntshavheni, the development of messenger service Mxit is a clear indication that local firms can develop enhanced technology systems when they get the right support. He made this statement during a Question and Answer session with reporters yesterday.

According to data from World Wide Worx, before the dominance of Facebook and WhatsApp in the social networking space, Mxit — A South African-owned social platform — had more than seven million active users in 2013. However, the social media platform could not cope with the heavy competition from Facebook apps (especially WhatsApp) and eventually collapsed in 2015.

“Our country must start supporting young individuals and citizens to create social media networks that we can access locally, the Minister said. “We cannot put complete reliance on the Western world for our technological environment, we must support one another as a nation,” he added.

It is believed that most South African ministers use WhatsApp as a means to communicate with one another.

Recall that two days ago, at exactly 4:43 pm (GMT+1) Facebook, WhatsApp and Instagram became inaccessible globally, causing many businesses and the company itself to lose billions of dollars. The shutdown would last for nearly six hours. Facebook’s engineering team has said that the global outage on its platforms occurred as a result of unexpected configuration changes on the backbone routers that controlled traffic between its data centres.

The outage has led to a series of debates and expert analyses globally, with many believing that the world has become too dependent on one particular company for social interactions. The South African Minister of communications shares this sentiment too.

Since the occurrence of the shutdown, messenger apps such as Singal and Telegram have experienced a significant increase in downloads.

The South African Minister also disclosed that the country is currently working with Sita — a state-owned tech company — to see how the government can aid the development of local social media platforms.

Ntshavheni — who was recently from the Department of Small Business Development — is positive about the development of a South African-owned messenger platform in the nearest future.