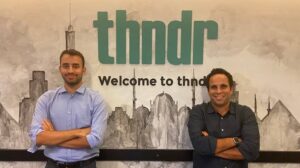 Thndr is set to operate nonstop within the local stock market, Egypt, and expand financial inclusion across the MENA region. The Egyptian-based FinTech startup closed a $20m Series A deal led by Prosus Ventures.

Thndr developer’s motive intended to virtualize the existing top-notch investment platform based in America such as TD Ameritrade, Robinhood, E Trade, Fidelity Investments, etc. Thndr is a replica of these listed US-based FinTech behemoth securities and other financial instruments to the underserved population within the MENA region.

Thndr COO, Seif Amr revealed the “first investment that 75% of our users have done was with less than $500. Without Thndr, these people wouldn’t even be able to open a brokerage account elsewhere because this is much less than the minimum account balances needed to open an account.”

Amr also noted that the financial instrument featured on Thndr is accessible without a fee to either register or manage assets on its investment network. Thndr’s initial section after registration educates its users to gain foreknowledge about holding securities and other investments or assets.

“Thndr will continue to add investment products; we are already in partnership with a partner broker and have been working with them over the last six months to launch U.S. securities in the region,” Amr said.

Unlike the MENA region, the West African society has accessed various financial instruments, to have traded and exchange securities in the stock market. The Nigerian FinTech sector has reportedly produced more FinTech startups focused on investment solutions.

In contrast with FinTech Startup selling investment in West Africa and to the MENA population, Nigeria has more FinTech startups with similar stock exchange with Thndr’s. The likes of Chala and Bamboo are Nigerian-based investment Startups built with high-end FinTech instruments that feature both local and international stocks on their autonomous trade network.

Amr has a futuristic plan to tweak its FinTech network to feature foreign stocks alongside the existing local stocks Thndr sells to Egyptians. Thndr’s all-time fundraising has amounted to $22m in sum. Thndr’s COO shared a vote of thanks to the venture capitalists that raised Series A round, including, Prosus Capital, Tiger Global, BECO Capital, etc. These capitalists collectively offered seed to accumulate Thndr’s Series A $20m deal.