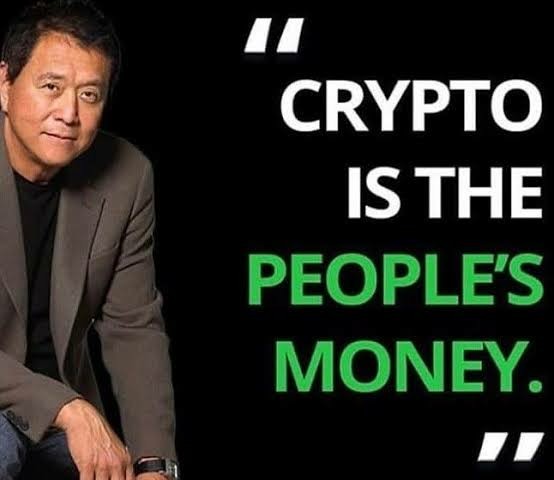 The world-famous author and business specialist, Robert Kiyosaki, shares insights about the lucrative crypto market via his podcast channel, Rich Dad. The directives Kiyosaki highlights are related to the insights he narrated in his flagship novel “Rich Dad Poor Dad” that brought his authorship career to the limelight.

The insights Kiyosaki highlighted focused on how investors can maneuver debt to maximize wealth trading digital coins. The Rich Dad Channel hosted by Kiyosaki analyzes how the crypto market is decentralized and manages to integrate macroeconomics paired with technology to exhibit financial inclusion for available earthlings.

Kiyosaki featured Jeff Wang and other cryptocurrency specialists on the Rich Dad Channel to discuss the lucrative cryptocurrency business and its decentralized charisma. The significant feature of the Blockchain network function without a limit nor is controlled by federal regulations endorsed by governments or individuals.

Kiyosaki and his guests debated about available tokens or digital currencies and assets in the decentralized Blockchain network. Bitcoin remains the flagship token amongst various other tokens such as Ethereum, Dodge, Solana, e-Naira, Litecoin, Ripple, Gala, Tron, etc. All the voices discussing the Cryptocurrency market supported Bitcoin’s response to having faced iterative turmoil and resurged above the least $40,000.

Recall, Bitcoin has reportedly spiked above half a hundred dollars and maintained that position for a long time. Lately, the decentralized Blockchain and its network of tokens have faltered due to regional regulators’ indulgence to discover the Blockchain loopholes and control every transaction which has been an impossible mission and has also created an intense reaction by traders on the crypto market.

“They wanna centralize control everything. So the reason I support Bitcoin, and especially blockchain, as it’s decentralized. It’s people’s money. Gold and silver are God’s money.” Kiyosaki said with optimism that he has “millions of dollars of gold, silver, and Bitcoin. We don’t save dollars. That’s the macro picture.”

Even though the Blockchain network is free of the regulator’s consent, there are applicable rules that are mandatory for the decentralized infrastructure to functions at the peak of its competence. For context, the Finance book author revealed that he does not have his wealth stacked up in real-time dollars due to the inevitable incompetent nature of a legal tender to be affected by inflation.

Over the last 50 years of trading with fiscal legal tender, the American dollar has iteratively controlled the global economy and this Currency has declined by 80% overtime. The US inflation rate has influenced the world economic growth to have attracted investors and other professionals to bypass the inflated prices paired with an elevated equity market.

The regulatory body has always consented to dismantle the Blockchain network that wires an enormous amount of money per transaction. Meanwhile, regulatory compliance with cryptocurrency intends to apprehend illegal crypto whales misusing the decentralized infrastructure for illegal financial inclusion. The introduction of the Central Bank Digital Currency, CBDC, is a regulatory scheme to control digital assets and the decentralized crypto market.

Several sovereign states have indulged in establishing their CBDC. In Africa, Nigeria remains the first country to run a federal CBDC likewise debuting a decentralized token dubbed e-Naira. The American government has reportedly consulted the Nigerian government to gain insight on how to manage the CBDC as a regulatory body as well as influencing both the virtual economy and the real-time economy off inflation via virtual fiat reserve and exchange.

“By placing urgency on research and development of a potential United States CBDC, should issuance be deemed in the national interest. The Order directs the U.S. Government to assess the technological infrastructure and capacity needs for a potential U.S. CBDC in a manner that protects Americans’ interests,” Kiyosaki said.

The American president Joe Biden has reportedly indulged his financial sector to research, explore and develop the possible implications for establishing the American CBDC after several pessimistic debates about accepting the crypto market as a federal endorsed financial inclusion. Still, Kiyosaki is convinced the CBDC can not control the current inflated economy via the crypto market which is likely influenced by the government interference with fiscal policies.

“Either the Govcoin or the Fedcoin, it’s good news for everybody that they’re coming after us. Then there will be hyperinflation like we’ve never seen before because when there is a Govcoin, they’re gonna bypass the bank system.”

Kiyosaki highlights the possibility of government intervention in officiating digital tokens which are likely to be christened “Fedcoin or Govcoin” that have a hundred percent government control. The Rich Dad host also revealed government-endorsed tokens bolsters economic defaults to hyperinflation whereby financial institutions will have zero control over the hyperinflated economy influenced by the government token.

In sum, the current economic status has encouraged the Gen-Z population to embrace the crypto market that sells virtual precious metals.