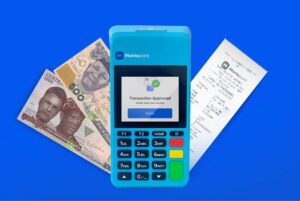 TeamApt’s announcement cover its expansion scheme that stretches towards Europe and rebranding its entity moniker to penetrate Africa likewise its potential customers outside the continent. This report focuses on the Nigerian largest business payments platform name change from TeamApt to Moniepoint to connect with its customers familiar with the brand POS service.

Moniepoint has reportedly been recognized as TeamApt’s flagship product service due to the enormous amount of recorded success. Moniepoint current status quo as a billion dollars unicorn was influenced by its parents to adopt its moniker to penetrate other regions with a uniform brand despite its conglomerate nature.

“The Moniepoint brand is already an established and trusted name among its customer base in Nigeria, and adopting it as the name means one less layer between the brand and the people it intends to serve.”

The days of TeamApt trends are over as Moniepoint sets to relocate Nigeria’s largest business payments headquarters to London — a baby step to global expansion. Although the FinTech unicorn’s announcement did not disclose further intent of transitioning its headquarters location. For context, Moniepoint London headquarters will not serve Britons yet with its FinTech services until further announcement.

Moniepoint London headquarters is a ceremonial office that snoops around the Brits finance markets to comprehend its penetration approach. While the Brits get familiar with Moniepoint’s FinTech competence, Moniepoint seems keener on penetrating Africa in terms of using the same marketing approach in Nigeria to debut its FinTech services in Eastern and Northern Africa.

Being recognized as a FinTech unicorn from Nigeria denotes a simple marketing approach the FinTech unicorn plied by serving underbanked regions in Nigeria. In 2022, Moniepoint became certified as Nigeria’s largest business payments platform and has recorded more than six hundred businesses. Its loyal customer base has skyrocketed its revenue earnings by 146 percent via POS service merchants and customers.

The previous business year tends to be favorable to Moniepoint having gained its unicorn status because of the flamboyant annual total payments volume exceeding $170 billion. The FinTech unicorn billion dollars TPV was generated in West Africa and its coming to Northern Africa and Eastern Africa via its flagship charm is optimal to remain a FinTech unicorn. This makes the African marketplace highly competitive.